Towards the end of the year, people get nostalgic for the previous 360+ days. I’m not usually one of those people, because it seems to me to be a forcing function to change something in the new year. I’d rather change when needed rather than save it for January.

Anyway, I feel a need to thank the MTBoS in a huge way. My professional career thanks you bigtime. As a science teacher (read: applied math), I know I don’t always fit in. But really, you’ve made me more excited about my job than I have been for a long time. I now probably spend a little too much time checking Twitter, a little too long thinking of blog posts, and a little too long attempting origami (to the detriment of lesson planning and a lot of what used to be down-time). I feel like I know some of you (or at least your online personalities), and I’m in awe of the amazing stuff you do.

So where’s the January resolution? Well, I want to continue blogging, but in a more focused way. As long as this pesky license renewal doesn’t get in the way, I’ll hopefully add some more What’s The Problem? entries and maybe more Talking Science With Kids too.

At least, that’s the plan. So say we all. Timey wimey. To infinity and beyond. And all that jazz.

Posted in Uncategorized and tagged about, MTBoS. Bookmark the permalink.

In the car after daycare, I asked my son what he’d done that day at “school”.


Parents, knowingly or not, encourage qualitative observations from really early ages. Using the traditional five senses, little kids figure out a lot of things. They leave (sticky) handprints everywhere. They put everything in their mouths. They ask about noises and things through the window, and most will let you know if you smell funny.


But how much is parroting back things the parent says, how much is actually their answer/thought/opinion, and how much is choosing the best option from a multiple choice “test”? Clearly, my son knew that ice wasn’t green, and he picked a color because were the only choices I gave him. Is this science? Is it merely word play? He mostly responded with which ever word I used last.


And some of his word choices aren’t accurate. I wasn’t in the room, but I’m pretty sure the ice was not dry. Perhaps he didn’t notice that his hands were wet because they were (more immediately) cold. He’s only had 2.5 years on this planet, so I’m not worried about it. Instead, I try to think about how his choices might actually be correct in his mind: Ice does sort of squish away when you touch it, so it’s sorta soft. It might have broken into little pieces, so it could have been bumpy.


But I’m not convinced that any of it (or many similar conversations) are bad or unworthy of having this talk again and again. At minimum, it’s exposing him to more words, and more words means more brain activity. He’s also hearing (learning?) something about opposites, physical characteristics of objects, and assigning those characteristics to the object he’s touching. He’s also getting some memory recall practice and general social interaction with me.


Not so bad for a car-ride.

Explaining Planetary Rotation to a Toddler

About a month ago, I picked up my 2-year-old from daycare. Living above the 45th parallel, the sun was already setting. From the back seat, I hear, “Why it dark, Mama?” So I reply with the obvious, “Well, the sun has gone down.”


Then, my science-teacher-brain kicks in. “Really, the Earth has turned, and it just looks like the sun has gone down.” Clearly, he wasn’t buying it. “No, why dark, Mama?”


I drove the rest of the way home, trying to think of other answers. He sorta took the “sun is gone” idea, but he was unsatisfied. When we got home, he had a conversation with my husband:


Z: Why dark, Dada?
Husband: The Earth turned and the sun has gone down.
Z: No, why dark?
Husband: Well, this flashlight is like the sun, and it shines on the Earth, which is like this potato. See how only half of the potato is lit? And so if you’re on this side of the potato, it’s daytime, and if the potato turns, it’s nighttime, but it looks like the sun went down. Got that?
Z: Yeah!


About a week after this detailed explanation, I’d again picked up my son from daycare, and this was the conversation in the car:

Z: Why dark, Mama?
Me: You tell me.
Z: Flashlight potato!


Once I stopped laughing, and we got home, we talked about the flashlight and potato again. He now diligently parrots back, “Earth turns, sun goes down,” when asked why it’s dark outside, but he’ll throw out a “flashlight potato” to make me laugh.

This past school year (and especially after this flashlight-potato idea), I’ve been thinking about how and when to introduce science to my son. And I’ve realized that I’m already showing him science. He can talk about why the sun goes down, which is pretty cool for a 2-year-old, even if he doesn’t know the exact mechanics of it yet. He can examine things and pull them apart and attempt to put them back together. He knows how to push buttons on elevators, cameras, and annoying electronic toys. He can identify colors and watch things change. He loves watching animals and wonders what they’re doing and what they eat and what their names are. He has licked nearly everything in the house at least once. Clearly, he’s a fantastic qualitative observer.


There’s a super cool site called Talking Math With Your Kids, run by Christopher Danielson, a.k.a., @Trianglemancsd. He posts short vignettes about his own conversations with his kids, as well as bits of math/brain research related to language and cognitive acquisition. In a lot of ways, it’s easy for parents to talk about simple math-things with kids. Everyone (who is slightly literate and has some degree of education) can do simple numbers or counting or even more versus less. It’s a matter of “seeing” math opportunities like we see language opportunities with small children (“I runned!” “Oh, you ran down the hallway?”)


I think there needs to be a “Talking Science With Your Kids” site. This is harder, I think, for parents to get correct because of standing misconceptions that they truly believe to be true, such as cracking knuckles causing arthritis (it doesn’t), the Earth is farther away from the sun during summer (only for the northern hemisphere, but it is warmer overall) and Vitamin C preventing colds (nope, but it may reduce duration). There are so many misconceptions going around, and a lot of them start with misinformation at an early age. It’s easy to become Calvin’s father and introduce bad science (accidentally or otherwise).


As far as looking things up, there are tons of websites for doing experiments with kids, which is awesome, but there aren’t many (any?) that I can think of that just dabble in the everyday, without a lesson plan or specific task to complete. There’s How Stuff Works to explain things, but I don’t want to have to look things up when talking with my kid. Instead, I want to encourage him to examine things, see how it works, and try it out. He sure doesn’t have qualms about punching all parts of the iPad at home (and while I don’t know how to reset certain features, he’s got it figured out and nothing’s broken).


So what can we do, as science-concerned parents? Dr. Tyson says, “Get outta the way!”

Posted in Uncategorized and tagged about, science_literacy, science_with_kids. Bookmark the permalink.

yes, it looks the same as the previous pictures, but trust me, the pesky doubled-up pieces are gone.


I figured if I could keep the pieces sorta “facing” the same way, it would work itself out. And then:


So, I took a few of my pre-constructs apart, but only as many as I had to. And it worked!


In other words, I had a semi-correct sorta kinda plan than didn’t really work as I thought, but did get the results I wanted.


So, I’ve answered half of my question (although I don’t know of a way to sorta “calculate” it beforehand, I’m inclined to think it’s something along the lines of the four-color problem), and it is possible to construct the model so that you only use three colors without similar-colored neighbors. But the other question still remains: is there a way to guarantee that this works? How about for other models?

My Page-a-day calendar posted this:

I am always ready to learn although I do not always like being taught.
— Winston Churchill

Posted in Uncategorized and tagged quotes. Bookmark the permalink.

In college, our classics professor brought a box of Andes mints to class every day, which the 20 of us shared while discussing Plato and John Locke. One kid, however collected all of the wrappers and would come back with the weirdest, coolest constructions of origami and modular origami. I never knew how that worked, and (in the dark, ancient days before quality search engines) I didn’t know how to look for it.


Yesterday, I was looking through @Mythagon‘s stuff because, well, she’s awesome. And there it is! With tons of links for my little nerd-heart! So of course, I get obsessed with it. “Just one small structure! I’ll stop!” Neon Post-It notes were sitting in front of me.


Here’s my 30-piece ball to which she linked: 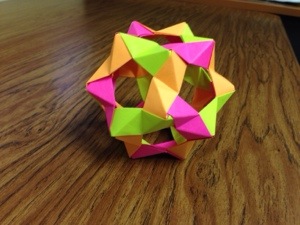 Which is pretty. But there’s a mistake. Two, actually:


Now, I’m pretty sure that the 30 pieces (10 each of yellow, orange, and pink) could be put together so that all colors only touch other colors. I wasn’t very careful with the construction, and just kinda jumped into it. But…
…is there a way I could figure out whether it’s possible?
AND
How can I make sure, during construction, that I get what I want?

Posted in Uncategorized and tagged math, MTBoS. Bookmark the permalink.

Holy cow, what a year so far. Now that the MTBoS challenges are (sadly!) at an end, I figure I should get back to posting things of my own volition. And so, here’s another WTP? post (can I use that? Looks kinda weird. I’ll think on it).


I use this web applet in physics. I don’t know how to get it into my webspace, so I’ll just provide this link: Press play. Step through with >> and << . The legend makes it look a little confusing, but once you decipher the picture, cover up the legend with a Post-It note or something. Also, this link seems to move every year or two, so I might update it if need be.

Posted in What's the Problem? and tagged science, science_literacy, whatstheprob. Bookmark the permalink.